We sell proxies for GeoIP testing, but geoip isn't the right solution for every problem. We saw a great post on Hacker News a few weeks ago suggesting that sites should use the browser's Accept-Language header to determine language, not their region of the world, and we agree! This got us thinking: How many sites actually support that?

This seemed like it should have been the easiest step, but it's pretty clear that Amazon bought Alexa then bolted an API onto the side of AWS and forgot about it. It's best to click links randomly until the sample code just starts working, then stop. Once I got the list of the 10,000 top sites, I shoved the data into MySQL.

Testing every possible language didn't seem feasible… But it seems likely that websites that support multiple languages would support at least one common language so I found a random site purporting to list the most common languages on the web and used that. Since a few resources listed both "Chinese" and "Mandarin Chinese", I decided to check both in my script. My final list is:

3. Strip HTML out of response

I wanted to run language detection on the responses to see what they'd sent me, but that seemed wrought of peril what with all the HTML tags, styling, etc embedded. Luckily the HTML2Text library does a pretty good job. Hand it the HTML, get the plain text response back. :gold-star:

There's two options here. Some sites are nice enough to declare their language in the HTML, e.g. <html lang="en">; if we don't get a language we'll need to figure it out on our own. I've used the cld language detection library in Ruby since I didn't see anything comparable for PHP. Luckily the kind folks at Detect Language have an API that will give me the language of a string really quickly. Handing them a few dollars to make this problem go away seemed like a great deal.

The script is pretty simple: load up all the sites / languages and iterate, sleeping after every request. Sure it would be slow, but who cares. I ran it with screen and it took a few days.

A really ugly SQL query gave me some rough data to work with:

Rather than brushing up on my SQL, I wrote a PHP script to iterate over it and give me some understandable output:

In total, 687 sites support multiple languages, 131 of them were googley

I'm surprised how few sites support determining language based on Accept-Language. We know that users are more likely to spend money when websites are localized for their needs. Google has clearly embraced this globally, but Yahoo hasn't. 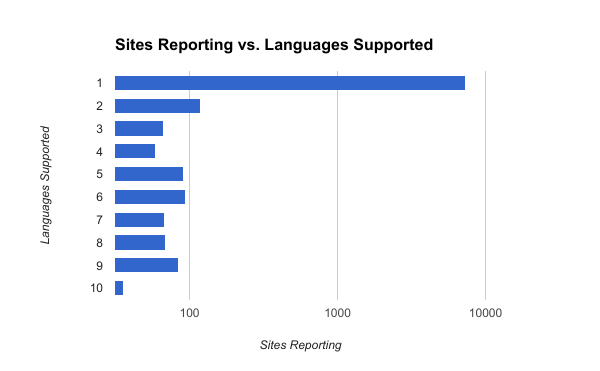 Graphing the number of sites that support multiple languages in buckets of 1,000 sites shows a strong peak on the left side, but no other real trends. Again I might have expected a more gradual trend down and to the right, showing that the more popular a site is, the more likely it is to support multiple languages, but thats not what we're seeing. 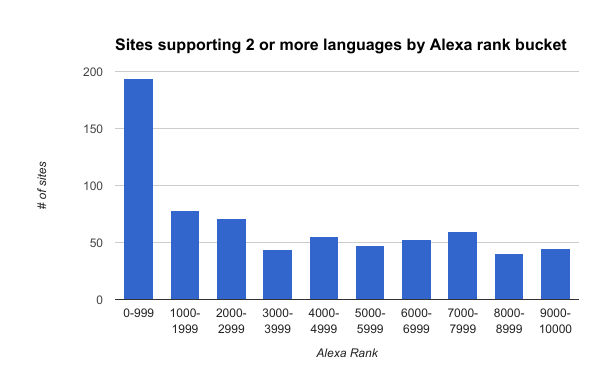 Zooming in on just the top 1000 sites, it's tempting call it more of a down and to the right trend, but it's mostly just a big spike on the left. 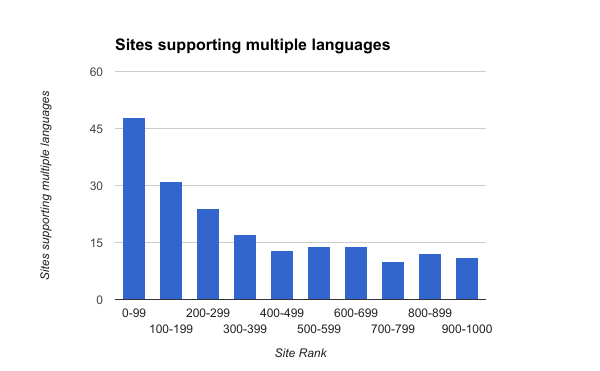 Join the discussion on Hacker News

Developer, support engineer, and occasional manager. I enjoy working on new products, listening to customers, and forgetting to bill them. Also: co-founder.