Dave Ceddia is a professional software developer with over 10 years of front-end development experience, currently focused on Facebook’s popular React JavaScript framework. While React is designed to make it painless to create interactive user interfaces using components that manage their own state, the framework has a notoriously steep learning curve for new developers. 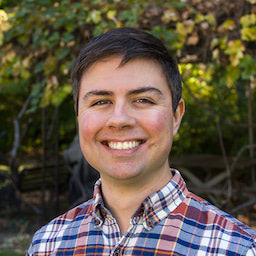 A few years ago, Dave started a side business that began as an educational blog before turning into a highly successful book called Pure React and an online course. He built these products to help developers who may have completed countless tutorials and videos but still had trouble putting the theory into practice when building their own apps.

Dave’s products became so successful that he quit his day job to become an author, blogger, meetup organizer, and provider of educational resources for aspiring React developers around the world.

Dave’s goal was to provide affordable educational resources to all developers — regardless of their location.

“I wanted to support parity pricing to scale down the price of the book based on where visitors are coming from.”

Using localization, he sought to customize the user experience on his landing pages based on the visitor’s country of origin. These changes could ultimately help increase sales, and more importantly, democratize access to his products.

Download our free checklist of actions that you can take to ensure your localization is working properly.

Initially, Dave built a tool using a free GeoIP database to look up visitor IP addresses, identify their country of origin, and provide unique discount codes to various countries that accounted for differences in purchasing power.

For example, aspiring developers from India could pay less than developers from the United States to account for differences in average income levels between the two countries — a concept known as purchasing power parity in economics.

Disappointingly, the initial response to the discount codes was underwhelming, with only a handful of sales over the course of a year. Either developers in these countries weren’t interested in his products or there was something wrong with his code.

Dave began to question if his GeoIP tracking functionality and discount codes were working all the time. The problem is that there’s no easy way to test if they’re working without taking the time and risk to set up a free proxy service. In many cases, these proxies are designed for people looking to circumvent content licensing in various countries, not for those looking to test their software functionality.

“Every now and then I was making a sale that had a discount code, but it wasn’t as frequent as I thought it would be.”

Dave never took the time to test the international sale pages using these conventional methods, but always wondered what was happening in the back of his mind.

He came across WonderProxy and decided to try it out.

Within a few minutes of using the service, he started hitting the book sales page from other countries. The backend code was working great by showing the correct discount code in the developer tools, but the front-end Javascript code wasn’t showing the correct banner advertising the discount code! Users from many target countries weren't seeing the discount code that was designed for them and, without this code, his products may have been overpriced in those markets.

After identifying the problem, Dave quickly fixed the issue on the front-end code. He made about 10 sales over the next month, which was a significant increase over the handful of sales that he had seen over the past year and a half.

These sales provided about $100 in extra income that he wouldn’t have earned otherwise, but more importantly, enabled him to make his educational products more affordable to aspiring developers in countries with less purchasing power.

“I’d like to get some sort of automated testing in place and I see how WonderProxy would make it really easy do to that.”

Dave used WonderProxy to diagnose and fix his book sales page, but he also found a number of other uses for the service.

Don’t forget to download our free checklist of actions that you can take to ensure your localization is working properly.

Through testing, he realized that some countries had much slower connections than he was accustomed to, which gave him a greater appreciation of load times and how page optimization can improve the user experience.

As his business grows, Dave plans to explore using WonderProxy to test localization in other projects across his growing portfolio of products and services.

He also plans on using WonderProxy’s testing automation capabilities in the future. By integrating with Selenium, WonderProxy makes it easy to ensure that everything is functioning properly without having to manually connect from different countries and visibly confirm functionality.

How to Get Started

WonderProxy has over 250 proxy servers across more than 80 countries covering 97% of the world’s GDP. In addition, we offer localization testing on a state-by-state level with a presence in most major U.S. cities. Whether you’re a QA or marketing team, you can use WonderProxy to ensure that your software and messages appear correct everywhere, every time.

Sign up for WonderProxy to test your localization and ensure that the proper discount codes, languages, currencies, images and other settings are being displayed for each region.

Justin is a technical writer and developer with over a decade of software development experience.